In the bee world, we like to keep it simple. We name you for what you are best known for.

Leafcutter bees cut leaves. Carpenter bees drill holes in wood. Mason bees build their houses from the dirt. You get the idea.

This is why the bumble bee and honey bee are named differently.

The bumblebee is known more for its loud low buzz, while the honeybee is known for the nectar syrup we like to drizzle on our favorite pastries.

There are other differences between bumble bees and honey bees, some subtle and others glaring that we shall explore as well.

Bumblebees are slightly bigger and hairier than their domesticated cousins. They are superbly equipped for the pollen-collecting job they are known for.

Honey bees have less hair which is why there are so many cases of mistaken identity between them and wasps such as yellow jackets. Honey bees are also a little slender, and you can see the head and thorax are clearly separate.

Bumblebees on the other hand look like the head and thorax are one. Unless you get really close, you can’t tell where the head ends and the thorax begins.

Honey bees like to live it up, literally. If a beekeeper or enthusiast doesn’t set up a beehive for them, they’ll settle for a cave, the space in your roof, or a hollowed tree. They keep above ground.

When you plan to accumulate large amounts of honey stores, you definitely want to keep it safe. Some of their common predators are prowlers, such as ants, skunks, and bears.

Being situated above ground allows them to employ gravity as a defense. I’ll give you an example. The giant honey bees of Nepal nest on cliffs that require prospective honey hunters to climb over 1000 ft in order to get at the honey. 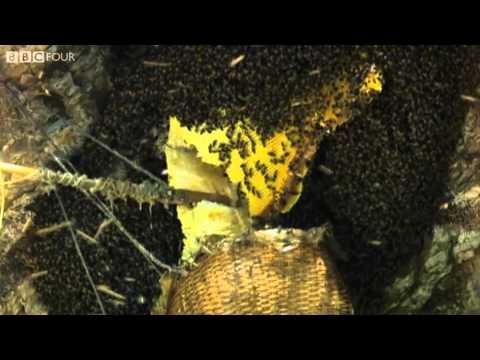 If you have a fear of heights, a swarm of very angry defensive bees won’t help you overcome your fear. That eliminates a number of potential predators.

Bumblebees on the other hand nest underground. They find abandoned burrows and build their nests.

Although they do make honey, they do so in small quantities because very few members of the colony need to survive the winter and they each go their separate way and fend for themselves. They also sleep through the winter so no need for the large stores.

Over time, breeders have grafted bees for their various traits including honey production, temperament, and recently varroa tolerance.

As a result, you’ll find that some honey bees will be more tolerant of your constant intrusion than a nest of bumblebees would.

Bumblebees don’t have the numbers that their cousins have, yet have been armed with the same weapon, a stinger.

Nature has thus seen fit to boost bumbleees with the ability to sting multiple times. Meanwhile, their counterparts only get that one chance.

If they happen to waste it on your glove, so be it. Then again, when you have 50,000 sisters, you can afford to waste a sting or two because a few thousand are bound to hit their mark.

The effect of the sting on the body is similar and is most dangerous if you have an allergy to bee stings. Death by a honey bee is more common than bumblebee because of the numbers involved.

Africanized bees, for instance, send out more than half the colony when they are under threat.

Bumblebees start off with just one queen. She’s a lone ranger who finds some good real estate and settles.

She builds cells in which to lay her eggs and cares for them until they are old enough to start caring for others. This is when she delegates most of her homecare duties and focuses on laying the eggs. She only has a few months to do this because she’ll be gone by winter to make way for some of her daughters to become queens.

The life of a queen honey bee is truly one of entitlement. She doesn’t travel without an entourage, which is what a swarm is. When the old queen leaves with her loyal subjects, the new queen isn’t left alone. If she was, she would starve. She has enough labor to take care of her and her young.

The sole responsibility of the queen bee is to lay eggs. She doesn’t build comb, doesn’t clean up, doesn’t do laundry, or nurse the babies. That is left to her daughters the worker bees.

As a result, she can make it through the winter because her daughters will cluster around her to keep her and themselves warm.

Warmth is definitely a game of numbers. The more they are, the more heat they generate. A strong hive will have bees that number in the tens of thousands, while bumblebees will only have a few hundred bees in a nest.

Who doesn’t like a good cuddle when the temperatures drop? Well, it would seem that the bumblebee doesn’t care too much for bundling together with its sisters or daughters.

As summer draws to a close, a bumblebee will lay the next generation of queens and drones. Previously, she was just laying little helpers, whose purpose was to collect food and care for their siblings.

Now, she’s getting ready to pass on the species torch. When the new queens emerge, they go and mate. As fall begins, they feed in order to get enough fat to last them through the winter.

By the time the temperatures drop, each queen will find her own safe space where she will sleep away the chill and emerge in spring.

Honeybees do not hibernate. They reduce their outdoor activities as fall gives way to winter, but they are still conscious in the hive, moving, and eating until the weather allows them to leave the safety of their nests. This is why they need to store whatever type of honey.

Unlike bumblebees that store the food they need inside their exoskeletons, bees build a pantry and use the stores to sustain the entire colony throughout the winter.

7 thoughts on “Bumble Bees Vs Honey Bees: 6 Differences That May Surprise You!”