Over the years, linden honey has been one of the premier varieties of honey that mankind always appreciated.

What makes it more intriguing is that lots of people may have also tried linden honey without knowing. This is because it is called by different names in various parts of the world.

What is Linden Honey and where does it come from?

Stories passed down from generation to generation talk about the tree from which Linden Honey is made out of. In ancient history, people revered the linden tree as the mystical tree of life. At some point in time, it was considered an object of worship.

Today, it remains as one of the staple “centerpiece” trees in town squares or main streets in the United States.

Referred to as basswood trees in North America, people in the U.K. refer to these as lime trees. Despite the disparity in the nomenclature, this plant belongs to the Tilia genus, which has 30 species of trees.

These trees are indigenous throughout most of the Northern Hemisphere. They thrive well in regions with temperate climates like Asia, where one can find the largest species diversity. They are widespread in the eastern half of the United States, with many linden groves concentrated near the Appalachian Mountains.

Among the most common ones, there is the Tilia americana and the White Basswood or Tilia Heterphylla. It is also found in central and eastern European countries, Russia, and China as the Small-leaved Lime (Tilia Cordata).

These trees can reach up to 20 to 40 meters high. Being hermaphroditic, they produce the perfect flowers with both male and female parts.

Obviously, bees love the linden flowers. The flower has a sweet smell like that of a mignonette that attracts honey bees.

Under favorable circumstances, linden is an extremely productive honey tree. One tree’s blossoms can produce as much as 40 pounds of nectar, enabling the honey bees to collect in abundance.

In times of strong nectar flows, it glistens on the flowers like morning dew. Specifically, the white basswood species produces so much nectar during the late spring and early summer.

Beekeepers who are also producers and sellers of linden honey are uncertain about their crop during harvest season. It is true that linden trees do have tremendous potential to produce a ton of honey. However, some factors can often interfere with achieving that ideal scenario.

While the flowers generally bloom for three weeks, adverse weather conditions can cut this period to only two days.

Added to that, heavy rains could possibly drain away the nectar. Besides, the flowers are somewhat prone to fall during a heavy rainfall.

What is Linden Honey?

Interestingly, linden honey is a monofloral honey. The particular Linden plant species source does not alter the honey’s sensory qualities.

As to its characteristics, linden honey is either white in color or relatively clear with a green tint. As it ages, its color turns to yellow to light amber. The very distinctive aroma of this honey is much stronger in comparison to other types of honey of the same appearance.

At first sniff, it has an unmistakable fresh woodlands aroma with a hint of menthol or mint. The honey’s taste is relatively mild but bolder. It’s surprising considering its pale appearance. It also comes with a woody taste with minty and spicy notes.

There is a persistent aftertaste that is slightly bitter, but definitely not offensive. This honey resonates with a pleasant sweetness. Many food experts say that its sweetness is not too overbearing.

Linden honey does have a high glucose-to-fructose content ratio so it will crystallize fairly quickly. It thickens and loses its transparency with fine to medium-sized crystals appearing. However, that will not ruin the quality of the honey. It can easily be de-crystallized by placing the jar of honey in a warm water bath.

What Are the Benefits of Linden Honey?

In just about any way one can imagine, the daily use of linden honey is recommended, preferably in the morning.

What is linden honey good for, you ask.

Benefits of Linden Honey in any menu and recipe

An excellent natural substitute for sugar, its sweetness makes it an ideal ingredient in baking and cooking recipes. It is also perfect for drizzling over breads, breakfast foods, or cheese, or eaten with yogurt and ice cream. There is no more need to use sugar as a sweetener in tea or coffee with the sweet flavor this one honey type can bring.

The floral notes of linden honey make it unique for diverse types of culinary applications like in salad dressings.

Use it to accompany fresh lemons with lukewarm water for a soothing booster. Or, you can go cold with a nice serving of lemon sherbet.

Linden honey contains fructose and glucose, natural sugars easily absorbed by the body in their original form. Thus, it is an excellent source of energy, especially in conditions where quick compensation is a necessity.

It is rich in 6-8% maltose, by which its usage has beneficial effects on digestive problems. Also known as Basswood honey, it contains little vitamins. It has small traces of Vitamin B-complex, Vitamin H, tocopherol, and Vitamin C (ascorbic acid).

It is also composed of organic and inorganic acids that cause a pleasant sour taste with lime honey flavor.

Another important component is the pollen of lime which is the source of amino acids and proteins. Polyphenols and flavonoids are responsible for antioxidant activity which makes linden honey a natural tonic for the body.

This honey has the highest antibacterial properties, as well as expectorant, anti-inflammatory, sedative, and laxative effects. Primarily used for treating colds and fever as a diaphoretic, it is also used as a fortifying agent. It prevents tonsillitis and controls the inflammation of respiratory organs.

Used for sore throat, cough, colds, laryngitis, and bronchitis, and many more, it helps to keep optimum health.

As an ointment, it is effective in treating wounds, burns, other skin problems, and other inflammatory diseases. Linden honey can slow the spread of bacteria because it contains hydrogen peroxide that stops bacterial growth.

The regular use of this honey helps you to maintain adequate osmotic pressure at the cellular level, normalizes metabolism, benefits digestion, and hormonal activity. Linden honey works favorably on liver function, helps produce bile and detoxification of the organs.

Also with soothing and sedative properties, it is recommended to eliminate nervousness, anxiety, and insomnia.

The distinct fragrance of this honey, along with its gentle taste, entices professional cosmetologists to create masks, wraps, and ointments. It contributes to maintaining youthful skin and the elasticity of the body, face, neck, hands, feet, and even hair.

Looking to Buy and Eager to get your Linden Honey fix?

Worry no more! We share with you this Linden Honey, which is a favorite!

Also a great choice is this Whole Foods Raw Linden Bulgarian Honey for a pure and raw option.

Linden honey is contraindicated or should not be consumed by:

As a general reminder, it is necessary to observe the recommended daily doses and duration of use of any honey varietal. 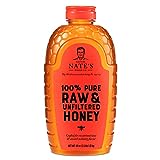