Among the many varietals that the British Isles can produce, heather honey stands out above them all.

What is heather honey?

Indulge your senses in a truly remarkable experience. The wonderful combination of distinct aroma, flavor, and texture would be an unforgettable encounter.

This varietal is more accessible in Western Europe, especially in the United Kingdom. However, for the rest of the world, it is a rare treat worth tasting.

But, where does this honey come from, and how is it produced?

People have been using heather for thousands of years for many various reasons. It is an essential food source for various farm animals. In the olden days, the heather blossom was used to dye wool yellow and tan leather, make baskets, bedding, and brooms.

Today, In Scotland, you can find beers made bitter with heather instead of hops. In traditional medicine, people use this herb for the treatment of disorders of the kidneys and urinary tract.

An evergreen native of Europe, this plant has a liking for dry, acidic soils. They thrive well in open sunny areas and moderate shade. Known as Common Heather because of its domination of moorlands and hills, it symbolizes Scotland.

In Norway, it is one of the national flowers, and they believe that it brings good luck. Hence, honey produced from these plants is also sometimes referred to as Scottish heather honey.

Honeybees collect nectar from two distinct types of mono-floral plants in order to produce heather honey. One is the single species, Ling Heather (Calluna vulgaris), and the other selection is the Erica species. Both of these species belong to the Ericaceae family.

Ling heather, also known as Scotch, Summer, or Autumn Heather, is a low-growing perennial shrub. It blooms in late summer, and these flowers are usually tiny purple or mauve, sometimes white.

Ling heathers blossom from late July and may last until November, depending on the variety and where it is located. However, August and September are the months when stunning patchworks of beautiful heather blooms are at their best. August 12 is a traditional date when beekeepers move their hives into any heather moorland. It is about time for the blossoming of the Ling flower.

Other heather plants belong to the Erica species, such as Erica Arborea, Erica Cinerea, and Erica Carnea. They bloom earlier and are less common, which makes them less viable for honey.

The actual nectar-producing period is short, taking about 4-6 days during the entire flowering season. Hence, it is important for any beekeeper not to miss bringing the beehives.

The heather flowers are the last ones the bees can find to gather nectar and make honey. After that, there is often no flower from any other plant that can provide them food on these moors. Thus, any beekeeper would be wise not to leave the hives all year round in these areas. Otherwise, the bees would starve.

The long-standing advice to those moving a hive to where heather grows is “go early and come home late.” It means early in the morning, early in August, and late in the evening, late in September.

Heather honey is less sweet than most of the other honey types.

What sets this honey apart from other varieties is its strong, pungent taste that borders on delightful bitterness. With its unique viscosity, bold taste, and rich amber color, this honey goes remarkably well with the meat or seafood menu.

Create a gloriously smoky marinade for cooking up a gourmet summer barbecue or ham with this honey. Or, simply spread or smother this honey on your favorite baked goods.

Because of its gelatinous state, this honey was historically considered as both a food and a drink.

Its thick consistency makes it a perfect topping on ice cream or waffles or mixed with yogurt. Enjoy it on a milk mousse, honey jelly, orange caramel sauce, and caramelized pine nuts.

Its spicy flavor enhances your favorite gingerbread and gives coffee a robust smoky taste. It is fabulous with strong cheeses, teacakes, porridge, and many other recipes.

One unique Scottish dish is the Cranachan or cream crowdie. It is a traditional dessert with whipped cream, whiskey, raspberries, and Scottish heather honey.  Another of their favorite dessert is a Scottish honey cake topped with almonds and Ling honey.

Of course, there are also some delicious regional recipes for poultry with glazes of Ling honey.

This honey also has been used to make some special alcoholic drinks like mead. For example, Ling honey is one of the ingredients in the Scottish liquor Drambuie and in Irish Mist.

For a fun twist, substitute Scottish Whiskey and Oatmeal instead of Egg Nog around Christmas time.

Highly prized for its effective healing benefits, Heather honey is rich in antioxidants and anti-bacterial properties.

Ling honey is the European honey variety with the highest levels of phenolic acids. These acids prevent the cellular damage caused by free radicals in the body. It also has potent anti-microbial properties that fight illnesses as serious as heart disease and cancer.

Is Heather honey as good as Manuka?

Heather honey has potent anti-bacterial and anti-microbial agents. Many believe this to be even better than Manuka honey in treating serious bacterial infections like MRSA. It helps to promote healing, cleans the wound, and keeps it infection-free.

Added to that, this honey is higher in protein than most honey which explains its unique consistency. Folk medicine tells of this honey treating digestive disorders and kidney infections.

Where to Buy Heather Honey

Despite its rarity, here are three heather honey that you can easily get your hands on! 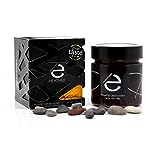 Ergon Greek HEATHER (ERICA) HONEY
Coming from Taygetus Mountain, in Peloponnese, Greece, this honey is made from the nectars of the tiny blossoms of the Erica species.
See on Amazon 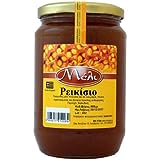 Greek Heather Honey
Dark and reddish in appearance, this jar of honey produced from heather nectars is perfect for everyone as a healthy sugar substitute.
See on Amazon

How do you extract heather honey?

Collecting heather honey is a problem because its high viscosity prevents it from spinning out of the combs. This thixotropic quality (naturally gel-like consistency) makes it extremely difficult to extract this honey. However, this can be done in either one of two ways.

First, you can crush and press the comb and collect the honey, but it is a destructive method. The other option is for apiaries to use special equipment for the task, like a honey extractor.

Oftentimes, beekeepers will not extract the honey from the comb but cut it up to sell as cut-comb heather honey.

What makes heather honey so special?

The bell heather honey harvested from the Erica species is quite good. But, it is not as terrific as Ling heather honey. Ling honey has a gorgeous reddish appearance, more like a “port wine” in color. It is not thixotropic, so it can be extracted in the normal way.

However, when beekeepers mention “heather honey,” they generally refer to ling heather honey as the “true” one.

It is usually dark amber, no lighter than caramel, and often featuring a red or orange tint. It has a room-filling pungent aroma that combines fruit and woodsy scents reminiscent of heather blossoms. Medium-bodied, it is quite strong but with a mildly sweet smoky flavor and a lingering tangy aftertaste.

Its crystallization rate is quite slow in comparison to other kinds of honey. In the early stages, this results in a smooth light-colored mass forming big rounded crystals. But if the honey is very pure, it may not crystallize at all.

Another one of its unusual characteristics is its normally high moisture content, typically associated with fermentation. This is due to its gel-like consistency that traps water. It makes it harder for the bees to work on evaporating the moisture out of the honey.

What makes heather honey particularly distinct from other types of honey is its viscosity. One may find it very hard to pour out of the honey jar.

Similar to manuka honey, if you tip the jar on its side, it will not ooze toward the top. Rather, it will remain firmly in place. The purer the heather honey, the longer it will stay “glued” to the container before softening and beginning to flow.

A high-quality one usually has a large number of air bubbles trapped inside as a result of the pressing process.