Are you wondering what type of beehive you should choose to get started on your journey?

Well, we’ve laid out each of the different hive options plus their pros and cons so you can ultimately choose the beehive style that works best for you.

Before we jump straight in and familiarize ourselves with the different beehives available, let’s first understand the magnitude of making such an important decision, so allow me to provide you with more context…

Understanding the Role Your Beehive Will Play

Have you ever been house shopping? If you have, then you know how vital it is that you get that perfect fit.

The only thing that makes it a little easier is if you’re buying in a buyer’s market.

All that means is that you, the buyer have more power than the seller since you have so many more options.

You can afford to be picky and the seller has to do everything in their power to make you want to live in their house.

Now in the bee world, this is the reality.

Bees don’t need beekeepers as much as we think they do.

They are pretty good at finding new homes on their own, in trees, abandoned structures, not-so-abandoned ceilings and so on.

The only reason beekeepers got involved in providing them with prime real-estate is to make it easier to get at their honey pantry.

The beehive is where bee comfort and human convenience meet.

This is why you will find that the various types of hives try to mimic a natural situation. That’s why most beehives are made of wood even today.

Once upon a time, when man had a hankering for honey, he would kill the colony to get at it.

That’s a pretty inefficient system, but that’s all we knew. Imagine if you had to kill a cow to get to the milk.

The fact that the bees lived through that age is a testament to the claim that they don’t need us as much as we assume they do.

So man, realizing the fatal flaw in this system, decided to find a way to keep the bees productive even as we raided the pantry.

Behold, the modern beehive was formed.

Now, let’s find out what beehive options you can provide for these enterprising tenants.

4 Most Common Types of Beehives and Their Pros and Cons

If your just getting started with beekeeping, then choosing your type hive in among one of the first tasks you must complete.

Below you will find the four beehive styles that you can choose from and their respective pros and cons.

Welcome to the Toyota of beehives.

When most people talk about hives, this is what they have in mind.

They look like a narrow chest of drawers and are named by their inventor, Reverend L.L. Langstroth.

What makes this type of hive so effective and allows its core principles to remain in use over 100 years later is the application of bee space.

Think of the Langstroth hive as a grocery store. The bees, in this case, are the proprietors.

Now, for the grocery store to be efficient, it has put the space available to the best possible use.

If the aisles are too wide, then you lose out on shelf space and limit how much product is available to the customer.

If it’s too narrow, you’ll have to change the name of the store to “Clean up on aisle”, because that’s all your customers will hear.

So you’ll want to seal off those spaces and find an alternative use for it, such as advertising. The bees work in a very similar way.

If the space in their beehive is too small, they seal it off with propolis. If the space is too wide, they build more honey storage space.

The sweet spot is between 1/4” and 3/8”. Once the Reverend figured that out, he had a type of hive that did not require the destruction of comb and the basic structure of the hive which allowed for efficient inspections.

The Langstroth is a vertical hive and expansion occurs either upward or downward. 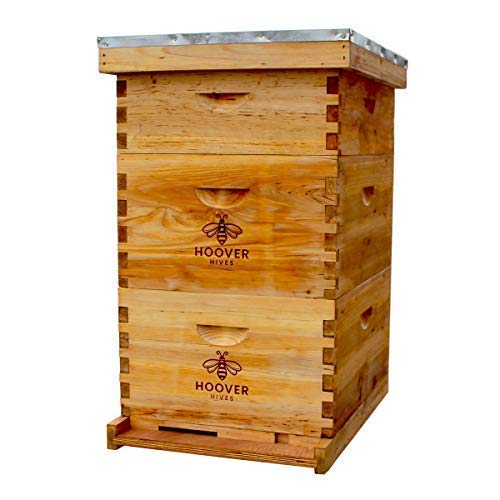 This is the mansion version of the real estate choices. There are many variations of this type of hive that involve the stacking of boxes that form the parts of the hive.

The lower chambers of this hive style tend to be larger in comparison to the upper chambers.

That’s because the lower chambers are used as the nursery of the colony, which we call the brood.

Beekeepers prefer to have the larger ones as the brood chambers since they provide the colony with enough space to populate the colony as well as store enough honey to get them through the winter.

The Number of Brood Boxes Needed for the Langstroth Hive

Well, that depends on how strong your colony is and your preference.

Most beekeepers have at least two brood boxes.

The best way to work out what configuration works in your area is to visit a few local beekeepers and find out what they use.

You won’t need to put all the boxes you purchase together all at once.

The boxes are added gradually as the workers fill up the existing frames with honeycomb.

The upper chamber is smaller in height and is referred to as the honey supers. That’s your area.

The bees will only fill this up once they have filled up the lower chambers, which is why this type of beehive is so popular.

It’s a great way to ensure you take just enough, without putting the survival of your honey makers at risk.

Hence, the Langstroth Hive is commonly used by commercial beekeepers.

Pros to Choosing The Langstroth Hive

Cons to Choosing The Langstroth Hive

Overall, when getting started in beekeeping, the Langstroth Hive is the most recommended hive type for the beginner. If the common Langstroth is the mansion version of the hive, then the long hive is the bungalow.

It’s really great for people whose heavy lifting days are behind them, and easy to work with for the disabled.

It has been developed from the Langstroth, but it longer. This is why there’s no heavy lifting. Everything is on one level.

Bees, being very organized, will maintain the brood primarily near the entrance, and the honey will be stored further away.

In some cases, this hive option may come with an observation window which makes it easier to check in on them especially during the cold months without having to open the hive each time.

Pros to Choosing The Long/Horizontal Hive

Cons to Choosing The Long/Horizontal Hive

The Warre (pronounce War-ray) was built to mimic a hollow tree.

A French Abbot called Emile Warré came up with this design as a solution to keeping bees with minimal interference to their day to day activities.

The boxes are square which is as close to a cylindrical shape as convenient manufacturing will allow.

Originally, the Warre only contained top bars which give the bees the freedom to build the comb they want.

The bees also get to work in the manner they choose, which is building downward.

They have the added feature of a quilt box, which is great for ventilation and regulating both temperature and humidity.

Pros to Choosing The Warre Hive

Cons to Choosing The Warre Hive

The Warre hive is a fantastic beehive option for keeping bees naturally as long as you understand that all your observation will be limited to the entrance.

Also known as the Kenyan Top Bar Hive, the Top Bar structure is like a hybrid of the Warre hives and the horizontal Langstroth hive.

Similar to the Warre hive, it mimics nature, in this case, the shape of a comb. If you look up pictures of feral colonies, you’ll notice a similarity in the shape of the comb.

They are all flat at the top where they are attached to a roof or ceiling and then get narrower as they move down.

The Top Bar hive has a trapezoid shape. The reason for this is that since it follows the shape of the comb, the bees are unlikely to attach the comb to the wall of the hive making the extraction much easier.

Since this type of hive is horizontal, it shares many benefits of the horizontal/Long hive.

As the name states, there are no frames, just a top bar allowing the bees to construct combs naturally.

How to Choose the Right Type of Beehive for You

There are other hives outside of the above 4 that I have mentioned but most will be variations of the Langstroth hive.

Even the Flow hive that is the buzz right now is a Langstroth hive with a honey extractor, meaning many of the maintenance requirements remain the same.

As you can see, no hive is perfect. What you need to do is prioritize your needs.

If you’re in no position to lift, then that eliminates two possibilities. Then your preference comes into play.

Do you dare go without foundation? Then the Top Bar will work for you. If not, then try the horizontal hive.

No matter what type of beehive you choose, if you take care of your bees and keep them healthy, they will be happy with your choice.

8 thoughts on “4 Types of Beehives & Their Pros and Cons (With Pictures!)”