Skip to content
Contents show
What You Need to Know on How to Move a Beehive
How Far Can a Bee Hive Be Moved?
How to Move a Beehive a Short Distance
Pre-step – Give the bees a new landmark
Step 1 – Seal the bees in.
Step 2 – Strap up the hive.
Step 3 – Get help.
Step 4 a) – Move it a couple of yards every other day.
Step 4 b) – Move the bees to the new location but put an obstruction at the entrance.
Step 4 c) – Move the bees about 3 miles away and move them back to the desired location in a couple of weeks.
Step 5-Remove hive stands and equipment from the previous location.
How to Move a Beehive a Long Distance
Step 1-3 are the same as that for a short distance.
Step 4 – Get adequate transport.
Step 5 – Place the hive in the new area and open up the entrance.
Conclusion

​I hate moving. As a creature of habit, moves are terribly disruptive. It doesn’t matter why. It could be for an exciting new job and I still find it a bother.

I have to form new relationships, work out the best eating spots, and figure out which neighbors to nod at and which ones decrypt a wordless greeting as a sign of arrogance.

I’ve also found that if I don’t move too far from where I previously was, sometimes, I find myself heading to my old house because I’ve switched my brain into autopilot. This is something my bees and I have in common when it comes to relocating.

Moving your hive(s) may seem like a daunting task but fret not. We’ve broken down the task of relocating or moving a beehive into easy to follow steps.

So, whether you need to move a beehive a short or long distance, rest assured that this guide will give you the confidence you need to relocate your bee friends without putting their lives in danger.

What You Need to Know on How to Move a Beehive

The major step on how to move a beehive is to understand the bee. You need to consider the bee perspective of their home, the immediate environment, how they recognize it, and how they find their way back even when they go three miles away to forage.

The second thing they look at is landmarks. Bees are quick studies. If you have ever placed a robbing screen on the entrance of a hive, you realize that the true citizens of that hive don’t have a problem moving in and out.

They have learned how to circumnavigate around this new structure. Foreigners, in this case, robbers rely solely on the sweet smell of honey and dive headfirst into the screen because this is not their home.

They haven’t come on a tourist ride so they don’t take the time to note the different structures present at this new hive.

Similarly, if you move a beehive previously located next to your barn, there is a possibility that the very next day, you’ll have half the workers right around the original spot buzzing as if to say “hey, what gives?! Wasn’t our hive right here a moment ago?”

Your barn formed a significant element in their geospatial map.

Timing of the move is very important. Bees work in the sun but love the shade. It’s best to move a beehive in the evening or early morning.

This way you have enough light to see what you’re doing but it’s cool enough for the bees to be comfortable. To move the bees you need to seal the entrance to the hive and you don’t want the bees to overheat.

Closing off the entrances is done in the evening after all the foragers have reported back from their field duties.

When they settle for some shut-eye, block the entrance with something breathable.

Some people use grass, others use steel wool or some newspaper. As long as the hive is well ventilation, the bees will be fine.

Odors are very important in the bee world and pheromones are the first thing that bees will recognize about their home.

When you capture a swarm yet leave the queen on a branch in the tree, the bees will always leave the hive/container and go back to their beloved pheromone releasing queen.

How Far Can a Bee Hive Be Moved?

Consider this: Honey bees are not native to the U.S. That tells you then you can move a beehive across oceans.

This great move was done at a time when air transport was left to winged animals. It’s actually trickier to move bees a short distance than a move across the country.

Beekeepers in the pollination business take their bees on an annual pilgrimage to almond farms hundreds of miles away.

Once the bees get there, everything is new so they are forced to make a new map of their surroundings and there’s no chance that they will go in search of their original home.

When you move your bees a few yards though, many of the old landmarks are still nearby so it is harder for them to adjust to the new position of the hive.

How to Move a Beehive a Short Distance

We’ve boiled down moving a beehive short distances into 6 easy to follow steps. Each step is outlined in greater detail below.

Pre-step – Give the bees a new landmark

Moving beehives isn’t a spur of the moment decision. You may have a week or so to make the move.

In order to help your bees identify their home in its new position, place a strikingly colored board leading up to the entrance of the hive a few days before the move.

When you finally make the move, ensure that the board moves with it. Rusty the beekeeper describes these boards as runway lights for honey bees. It’ll help guide the ladies home.

Even though you’re moving the hive from one corner of the back yard to the other, bees don’t take kindly to the earthquake sensation you cause with every step. As an added precaution, suit up.

A bee veil and gloves will help keep the stings away just in case a few angry ladies get out.

As mentioned previously, it is best to seal them in the hive after sunset. That way you’re sure you have the whole colony indoors. 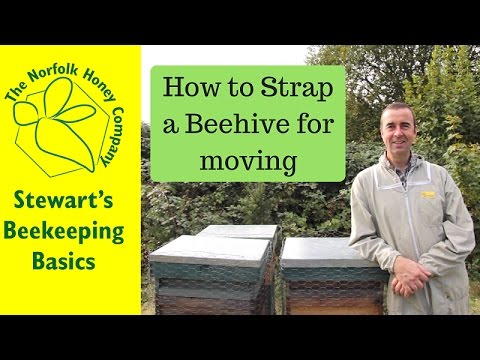 Even though the bees are really good at sealing up all the little cracks and crevices in the hive with sticky propolis, they may neglect the partition between the bottom board and the rest of the hive body.

To avoid the possibility of the hive falling apart while in transit, you can use straps like these, those used to keep the hive from falling off the hive stand.

This will keep the body of the hive in one piece and make it easier to move.

Hives, especially well-established ones are quite heavy. You will need someone to help you move it unless there’s some groundbreaking back replacement surgery I haven’t heard about.

Step 4 a) – Move it a couple of yards every other day.

Assuming your yard doesn’t go on for miles, your final destination may be 30 feet or less from the original position meaning the bees won’t feel the need to reorient themselves or form a new map of their surroundings because all the old landmarks are still there.

By doing a gradual move, i.e, moving a few feet every other day, your bees will return to the same original spot on the first day, but since the hive is quite near, they will find their way into the hive.

After a couple of days when they stop ‘misplacing’ their home and adjust, move them again. Repeat until the hive is in the desired location.

Step 4 b) – Move the bees to the new location but put an obstruction at the entrance.

The obstacle you place could be a branch from a shrub. The idea is to convince the bees that they are in a new neighborhood and their internal GPS needs recalibration.

Again, there are no guarantees but it has worked well for many.

Step 4 c) – Move the bees about 3 miles away and move them back to the desired location in a couple of weeks.

It sounds drastic but it is effective. If they move far enough away, then they make a new map of the new place.

Moving them back to your backyard means that your crab apple tree becomes a new landmark and they will adjust better than if they had moved the 30 feet on the first day.

This step needs a lot more work but if all else fails, give this a try.

Step 5-Remove hive stands and equipment from the previous location.

Bees are very attached to odor and if the old neighborhood smells familiar, they will keep trying to set up shop there.

Remove old hive stands as well as idle equipment from the first location.

How to Move a Beehive a Long Distance

We’ve boiled down moving a beehive long distances into 5 easy to follow steps. Each step is outlined in greater detail below.

Step 1-3 are the same as that for a short distance.

Ensure that the hive is well ventilated for the trip because your bees will be indoors much longer.

You’ll get away with carrying a swarm in the back seat of your sedan, but established hives are a different ball-game.

Get a pick-up truck for the move and secure the hive so that you minimize the vibrations that go through the hive.

The last thing you want is to dislodge the brood comb as you move, or undo the seal to the entrance in the middle of the trip.

Step 5 – Place the hive in the new area and open up the entrance.

Since everything is new, you don’t risk having the bees trying to get back to their original home.

They’ll take a day or two to understand their new surroundings and then they’ll be back in business.

Moving hives isn’t complicated but it is hard work. You need to be sensitive to the needs of the bee when choosing where to move the bees.

Bees are quite resilient and unless something smashes the hive open during the move, you are likely to keep your bees happy and healthy even after the move.

When you move a beehive, you may lose a few foragers at first. But the bees are unlikely to abscond if all other factors remain constant, i.e the environment is conducive.

As long as you’ve thought things through, they’ll take to their new home like a fish to water.