The best things in life are free, so they say. A swarm of bees definitely fits in this category.

A package of bees costs over $100, so wouldn’t it be nice if you could avoid that cost altogether? If the swarm is kind, it will settle on a branch or a mailbox that you can access, giving you a chance to keep the swarm for yourself.

Some stubborn colonies may choose to settle at the top of a 20-foot tree. Short of telekinesis, it’s virtually impossible to collect that swarm.

Your first lesson is to know which ones to capture and which ones to ‘tearfully’ let go. Here, we’ll dive into what you need to do next after catching a swarm of bees.

1. Get the Swarm Ball Into Some Type of Container What do you do when nature buzz wraps a present right in your vicinity? You need to get the swarm ball into a container.

It could be a cardboard box, a bucket, a nucleus (known commonly as a nuc) or even a hive.

The container you choose will depend on the location of the swarm and how far you need to move it.

How to Get the Swarm Into a Container

Getting the swarm into the container isn’t complicated.

Swarms Located on a Shrub

If it’s located on a shrub, you can simply cut off the branch holding the swarm and place it inside the container.

If you are using a hive, place the branch on top of the frames and allow the bees to move into the hive voluntarily.

It is said that this makes the bees feel like they have chosen the hive of their own free will, reducing the risk that they will abscond. You have fewer bees flying up and away so it is gentler on the bees. If they are located on a thick branch of a tree that can’t simply be snipped off, you can either scoop them up with your hands or shake the branch into the container. Make sure you get the queen in the container.

Once she’s in, the rest will dutifully follow. You don’t need to see her. She’ll be the one in the middle of the swarm so just keep scooping.

If the bees keep going back to the branch, you know you still haven’t got the queen. You will have to keep at it until you’re sure that the queen is in the container.

Swarms Caught in The Middle of the Day

If you have done this in the middle of the day, it is advisable to leave the container as close to the spot where you found the swarm until dusk.

That’s because the swarm will have sent out scout bees and their homing device will lead them back to the very same branch where you found the swarm (or as I like to call them, the castle-less kingdom).

You could use a repellent such as ‘honey-b-gone’ on the tree/branch to discourage the latecomers from hanging around there and directing them into your nuc/hive/box.

2. Move the Container or Hive to its Permanent Location 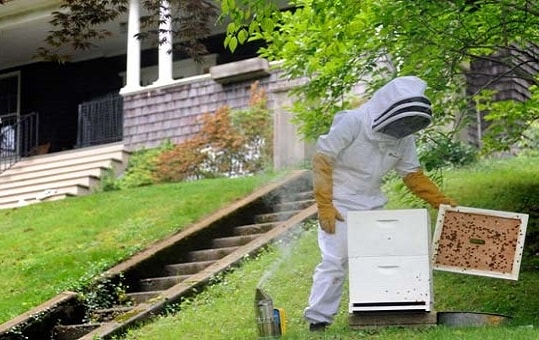 Once the sun sets, the bees hunker down for the night, making it the perfect time to relocate your new swarm. It’s always advisable to have a nuc or hive at hand for the relocation.

They offer better ventilation for the bees and are easier to seal without harming your new tenants. If you used a bucket or a cardboard box to catch the swarm, you will want to place them in a nuc as soon as possible.

If the swarm was located in a tall tree that was difficult to access, you can opt to sacrifice the scouts that are still at large and move the swarm immediately.

No Spare Hive? Do This Instead

If you don’t have a spare hive, then the swarm will also be happy in a nuc, which is a small hive that fits about 5 frames. This can buy you some time because they’ll comfortably build comb and raise brood for several weeks before it gets cramped.

You could probably keep them in a box for a day or two, but no longer because they will start to draw comb.

If you are going to limit their movements, your chosen container must allow you to feed them while you acquire a nuc or a hive.

3. The Sooner They Can Feel at Home the Better

Many new beeks will frequently ask how long they should wait before installing the new swarm in a hive. The answer is simple. You can do it immediately. In fact, the sooner they can feel at home the better.

That said, bees have been known to abscond as soon as you move them meaning you may find yourself recapturing the same swarm within a few days.

Incentivize them to stay by providing some open brood from another hive. Make sure you don’t have any nurse bees clinging on.

Just like kids, if you want them to stay put, put them to work. Their instincts to care for the young will reduce the risk of absconding.

If you don’t have any brood to spare, you may need to cover the entrance with a queen excluder. If she can’t leave, neither can her subjects.

Keep it on for a few days and observe the bees. Once you spot them bringing in pollen, it’s a safe bet that they’ve settled in.

4. Give the Newly Caught Swarm a Week or Two Until You go in and Inspect Them How long after having a swarm should you wait to go in and inspect? Give them about a week or two. Just like you, they may not like their housing decision made for them and will be looking for any reason to leave.

Your overenthusiastic presence, ripping the roof off over their heads just as they are figuring out where the sofa goes doesn’t encourage them to hang around.

Two weeks allows them to start building comb and the queen can begin populating the hive once again.

Capturing the swarm is the hardest part of the process. The rest is not complicated.

You may have a few mishaps with your first capture, but you’ll learn and get better with every attempt.

When swarm season begins, make sure you have hives ready to house your guests. You never know when a swarm will come a-calling.